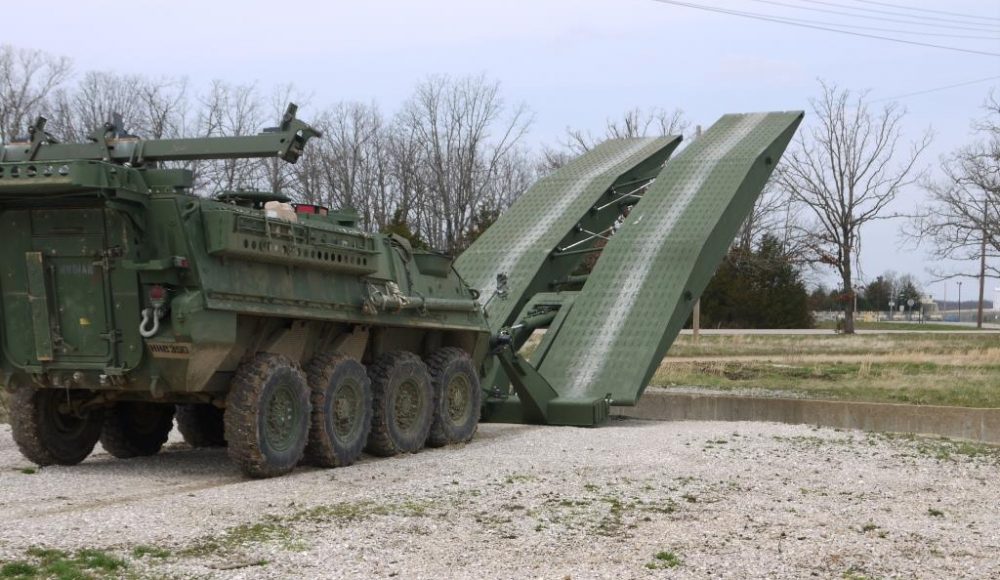 Bridging the Gap for Stryker

Pearson Engineering was pleased to have the company's medium wheeled bridging capability discussed in a recent edition of 'Jane's International Defence Review', with content prepared by Mr Christopher F Foss.

The baseline Stryker M1132 ESV platform is retained with its roof-mounted remote weapon station (RWS) retracted, while a Pearson Engineering Jettison Fitting Kit is fitted to the front of the hull to support the Bridge Launch Mechanism (BLM).

Four hydraulic cylinders are used to articulate the BLM with hydraulic power being provided directly from the M1132 ESV platform. The BLM enables the crew of the M1132 ESV to launch or recover the one-piece bridge over the front of the vehicle in less that two minutes while remaining under full armour protection.

When launching or recovering the bridge, the foot of the BLM remains in contact with the ground, which reduces the load transfer onto the M1132 ESV launch platform and provides greater stability.

While travelling, the bridge is positioned horizontally and secured to the vehicle using a Rear Bridge Support (RBS), which is mounted above the rear troop compartment.

The Stryker M1132 ESV is deployed in large numbers by the US Army’s Stryker Bridgade Combat Teams (BCT) and the same equipment can be applied to other tracked and wheeled armoured vehicles.

The company has also supplied the US Army with a range of front end attachments (FEA) that enable the vehicle to be rapidly reconfigured in the field to address specific battlefield threats.