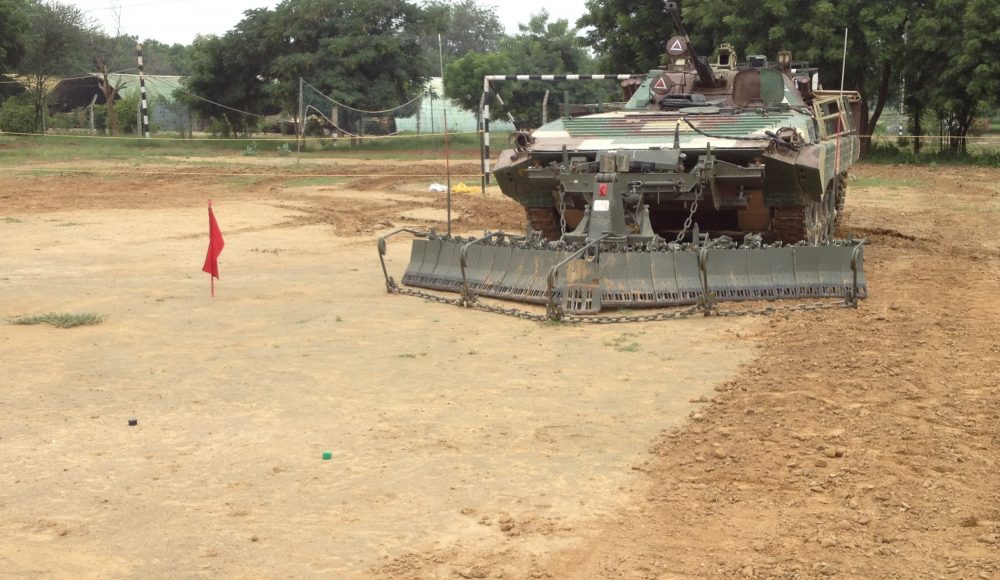 Pearson Engineering will exhibit on stand J528, Hall 6 at Eurosatory this year in support of a number of key export opportunities for both the company’s combat engineering range and MineWolf products.

Working in partnership with Bharat Earth Moving Limited (BEML) based in Bangalore, Pearson Engineering has been successful at recent Indian Army trials for the selection of a Surface Mine Clearance System‎ for the clearance of surface laid mines and other ordnance. The Indian Army will operate the system on their BMP tracked infantry fighting vehicles.

The contract between the Indian Ministry of Defence and BEML was signed in March 2016 for the delivery of 41 complete sets, with first deliveries scheduled to commence this year.

International Sales and Marketing Manager Richard Beatson said “The winning and award of this contract demonstrates Pearson Engineering’s commitment to business in India and our intent to work with local Indian industry in order to play our part in the important ‘Make in India’ programme.”

Pearson Engineering will display a version of the company’s Surface Clearance Device on their stand which will represent just one of a number of interchangeable attachments employed in support of a range of combat engineering tasks.

Pearson Engineering will also display its MineWolf MW50 system in a Counter-IED configuration. Following acquisition of MineWolf IP and assets in February 2016, a dedicated MineWolf team has been supporting existing customers worldwide with equipment and spares requirements. In the short time since acquisition, the MineWolf team has rapidly grown, under the leadership of the MineWolf Director, Bryan Findlay to include personnel dedicated to Engineering, Operations, Project Management, Spares Supply, Field Service and Logistics Support.

The MW50 is an Unmanned System designed to reduce human exposure during De-mining, Explosive Ordnance Disposal, Obstacle Reduction and Counter-IED tasks. Able to be operated at up to 1,000m, the product is designed for use in extremely hostile environments, and can be fitted with a range of interchangeable tools.