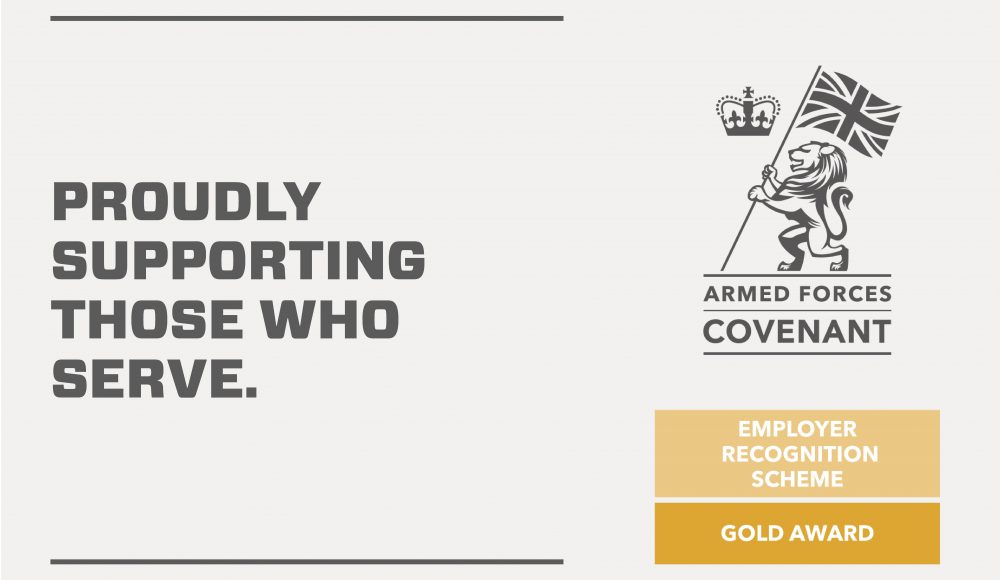 Pearson Engineering has received a prestigious Gold Award from the Ministry of Defence under its Employer Recognition Scheme. The company has been recognised for its support to Reservists, Veterans, Cadet Force Adult Volunteers and for the Spouses and Partners of those serving in the Armed Forces.

As providers of life-saving equipment to armed forces around the world, it is important to us that we are proactive champions of the Armed Forces Community, both serving and veterans. More than 12% of our employees have an Armed Forces background and we actively encourage all employers to recognise the value of recruiting military veterans.

Our contribution includes support to Reservists within the company to undertake military training with full pay, hosting study days for local Army units, support to British Military charities with both time and funds, skills development activities for Veterans and various recruitment initiatives. Furthermore, Pearson Engineering advocates for other local companies to follow in our footsteps and we recently held an event which led to a pledge from 7 companies to sign the Armed Forces Covenant. Our support for Defence People is highly valued by our staff, who are directly involved in many forces’ friendly initiatives.

Managing Director, Craig Priday said: “I’m extremely pleased and proud that Pearson Engineering has been chosen to receive this important award. The Armed Forces Covenant initiative has been a great way for the company to demonstrate our long-term commitment to the armed forces.”

David Eccles, North East Employer Engagement Director for the Ministry of Defence said: “We are very pleased that Pearson Engineering has been recognised by being awarded the Ministry of Defence’s Employer Recognition Scheme (ERS) Gold Award – the scheme’s highest accolade. The Defence ERS encourages employers to support defence and inspire others to do the same and Pearson Engineering have certainly demonstrated that. For the two years I have been personally associated with them, they have shown a clear understanding of what there is to gain in employing military veterans and they have been exceptionally supportive to their employees who are members of the Reserve Forces. The ERS encompasses Bronze, Silver and Gold awards for employer organisations that pledge, demonstrate or advocate support to support to Defence and the Armed Forces community, and align their values within the Armed Forces Covenant.”

HR Manager, Elizabeth Hubbuck said: “We were excited to be told of our Gold Award in this scheme as it recognises the hard work of the company and our employees in actively promoting Pearson Engineering as a great place for Defence People to work. As a business, we are committed to supporting the community that we serve and we are therefore glad to be able to actively promote skills and opportunities for Reservists, Veterans, Volunteers, and their partners. They bring a rich and diverse experience to industry and it is important that we repay that. I know that this special accolade will further inspire us to advocate on behalf of the MoD’s Employer’s Recognition Scheme. Congratulations to all the organisations who have received this award.”