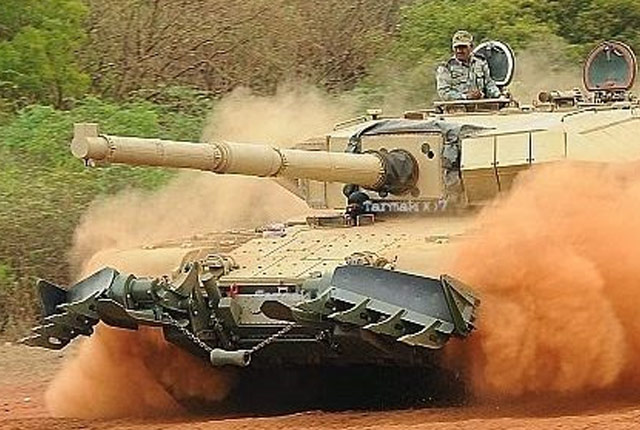 Following a display of the TWMP attached to the indigenous Arjun Mk II tank at India’s Republic Day, the country’s showcase of its latest and most innovative military equipment, DRDO chose to exhibit the plough on its stand at DEFEXPO.

The TWMP offers Counter-Mine and Counter-IED capability to the host vehicle by clearing concealed or buried land mines across each track width of the vehicle, thus providing vehicle self-protection.

The plough, which is suitable for use on Heavy and Medium tracked vehicles is battle proven and is in service with, amongst others, the British Army. It is hoped that Pearson Engineering will be awarded a contract to provide 124 of the systems to the Indian Army following trials in Pokhran, Rajasthan.

Mike McCartney, Project Manager said “We are encouraged by the response to displaying the TWMP at DEFEXPO this year. The TWMP has undergone rigorous field evaluations by the Indian Ministry of Defence (IMoD) over the past two years and we are confident that the product will complete the final testing phase successfully. We have provided a number of pieces of equipment to India and have a long established relationship with CVRDE and key Indian manufacturers. We look forward to continued collaboration in the future.”

Pearson Engineering’s Full Width Mine Plough (FWMP) was displayed within the UK pavilion at the exhibition and drew a large, uniformed audience. The product has already been supplied to IMoD for their Engineer vehicles and the team were on hand to gather feedback and to offer support to the user community.

The FWMP is designed to breach mine fields and protects the full width of the vehicle. The system clears a safe route, by bringing land mines to the surface and moving them wide and clear of the vehicle, thus providing a minefield breach for other vehicles to follow.

The flagship product has been supplied and supported throughout the world and is in service with the British Army, the U.S. Army, the U.S. Marine Corps and the Finnish, Danish, Dutch and Swedish Armed Forces.