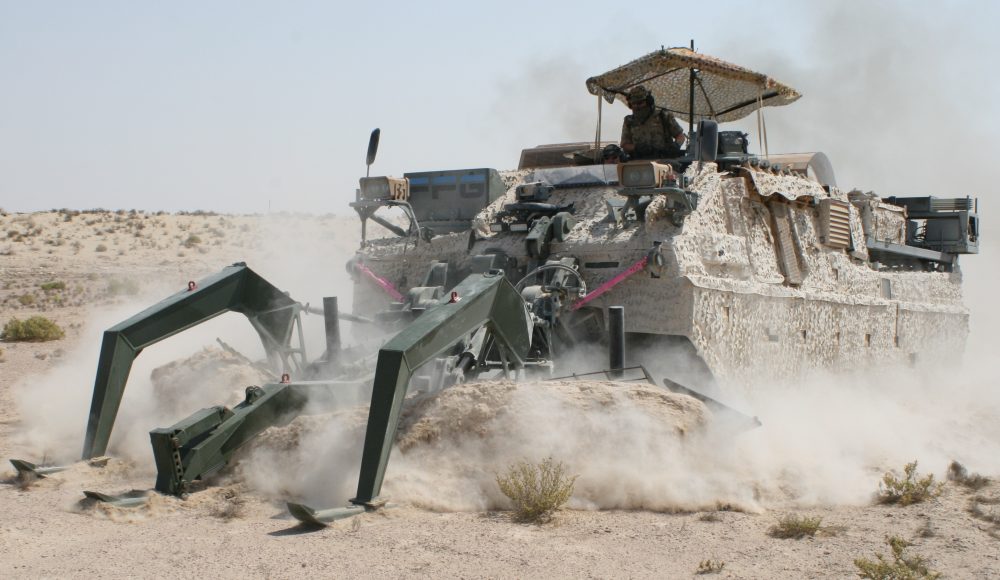 Pearson Engineering is proud to announce that it has been awarded a contract by FFG of Germany to supply Mine Breaching Systems for use on its Wisent II Armoured Engineer Vehicles (AEV). These powerful systems continue to feature amongst Pearson Engineering’s most important and capable products with the latest batch destined for service in the Middle East.

The Mine Breaching System includes the Full Width Mine Plough which provides breaching capabilities to the world’s Armed Forces by bringing buried or concealed mines and IEDs to the surface and moving them wide and clear of the full width of the vehicle.

The Full Width Mine Ploughs will be provided with Magnetic Signature Duplicators, a system which sends out a magnetic signature ahead of the vehicle to detonate magnetic influence fused mines.

The Pearson Engineering Marker System which fires marker poles into the ground at controlled intervals to clearly mark out hazardous areas such as the edges of a minefield breached lane will also be supplied as part of the overall system.

Pearson Engineering is proud to continue its relationship with FFG following years of successful collaboration to provide capability to end-users such as Canada, UAE, Qatar and Denmark. The latest order for the Middle East comes in advance of deliveries for end-users in Qatar and Denmark.

Project Manager Steve Fenton said. “Pearson Engineering is very pleased to be able to continue our relationship with FFG by direct supply of Mine Breaching Systems for the Wisent II AEV. Our engineering relationship originated in 2009 when FFG integrated our equipment to the Wisent I AEV on behalf of the Danish Army. We have since continued to work closely and in 2012 received our first direct supply order for 14 Mine Breaching Systems.”