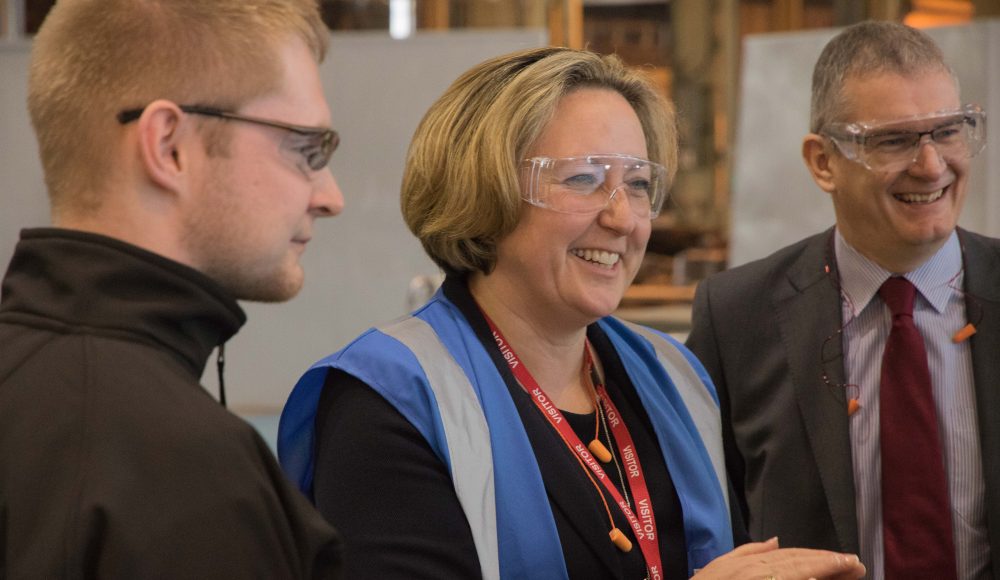 Anne-Marie Trevelyan MP visited Pearson Engineering last week to see first-hand how work carried out at Armstrong Works is contributing towards prosperity in the North East. As MP for Berwick-upon-Tweed, Mrs Trevelyan's constituency covers a substantial proportion of Northumberland.

Managing Director, Craig Priday and Head of Marketing, Nicola Irving took the opportunity to explain how product development and innovation has secured new deals for the company. As a result, the company’s growth into new sectors has stimulated active engagement with new suppliers and recruits in the region.

Further, Pearson Engineering’s support to the Armed Forces Covenant was discussed. The company recognises the value that ex-servicemen and women bring to business and has so far received a covenant related Bronze Award in recognition of continued commitment to the Armed Forces. Following re-election in 2017, Mrs Trevelyan was appointed to Chair the All-Party Parliamentary Group on the Armed Forces Covenant and she continues her military support as Parliamentary Private Secretary to Ministers at the Ministry of Defence.

During a tour of the facility, Mrs Trevelyan was introduced to some of Pearson Engineering’s youngest team members, including Liam Stuart who has recently joined as a Draughting Apprentice. Pearson Engineering is a firm believer in helping to shape the future of local engineering and has an active apprenticeship programme. The company also engages widely to promote STEM to aspiring engineers and is involved with a number of local initiatives including the Arkwright Scholarship.

Mrs Trevelyan said “It was a great pleasure to return to the vast factory on the Scotswood Road, an iconic part of the North East’s economic and military heritage and future prosperity. I was so pleased, in this Year of Engineering, to meet young apprentices learning the ropes for 21st century engineering, with skill sets which are unchanged in engineering alongside the use of IT to build world-leading products.”

Craig Priday added “We were delighted to welcome Anne-Marie to visit us at Armstrong Works. She had visited the facility during the time of Challenger 2’s manufacture and so it was pleasure to explain the role it plays in defence and security today. We’re proud to demonstrate the range of products and services that we offer to the British Army and to Armed Forces throughout the world. We appreciate the support shown to us by our local MPs and we look forward to continuing our conversations in the future.”