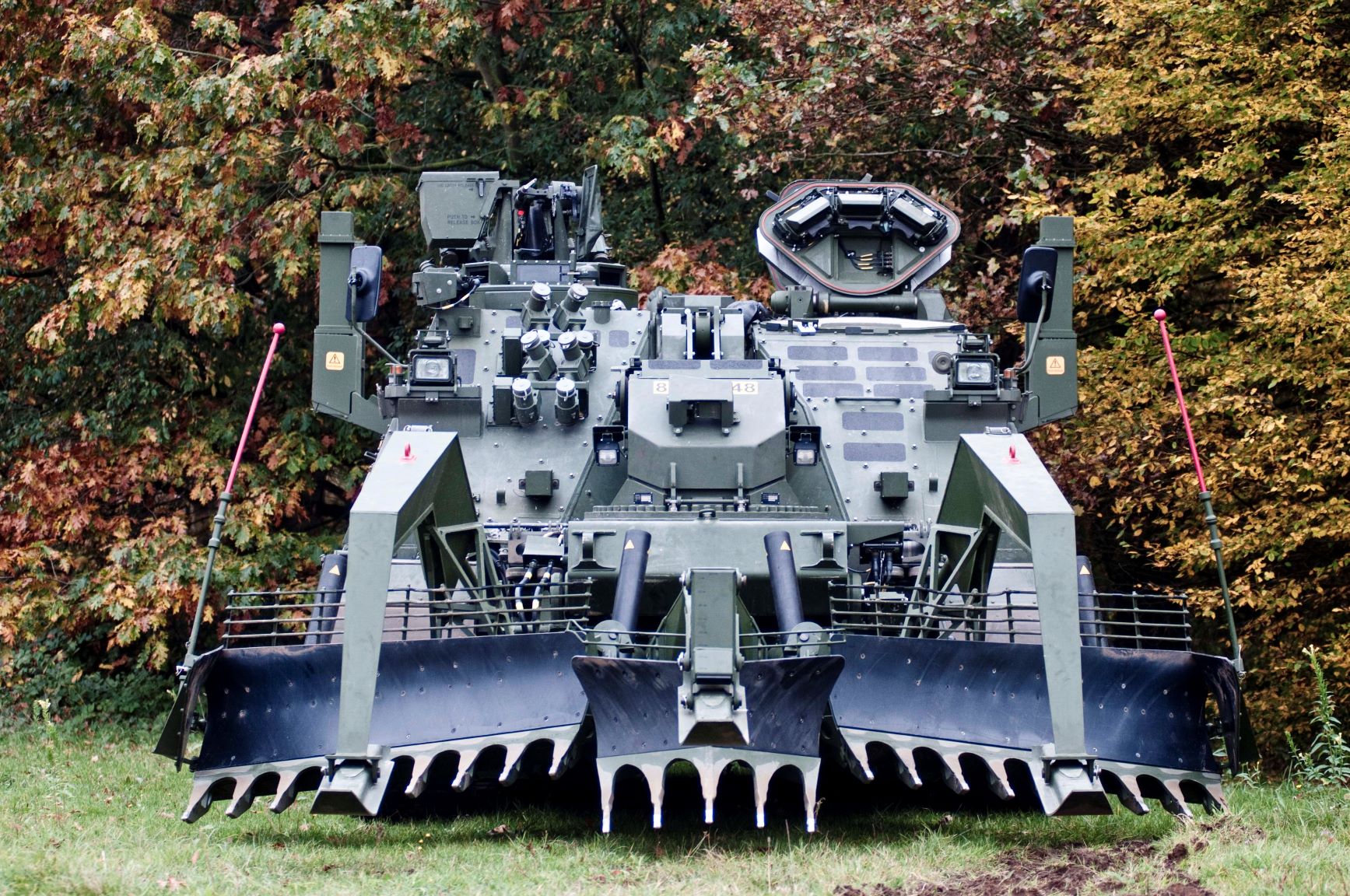 The modern armoured engineer vehicle (AEV) can trace its lineage back to the specially modified tanks used for the D-Day landings in 1944. Their primary role is to provide manoeuvre support around battlefields, creating opportunities for mobility and supporting counter-mobility requirements in direct support of combat arms. In the words of one OEM: ‘AEVs are an essential role that helps combat vehicles to move and defend.’ Countering mines, clearing/creating obstacles and crossing gaps represent the main demand from land forces.

Other lighter specialist engineer vehicles also exist in diﬀerent armies, these opurpose-designed for tasks such as earthmoving. Examples are the US M9 Armoured Combat Earthmover or the British Terrier. Simon Jackson, head of UK sales for Rheinmetall BAE Systems Land (RBSL), told Shephard about two of the company’s oﬀerings, the aforementioned Terrier and the Trojan. The 33t Terrier, which can be transported by A400M aircrabreaching (including route clearance/route proving) with an excavator arm, bucket, rock hammer and ripper; mine and IED clearance (with a subsurface track-width mine plough and/or a towed Python explosive route clearance system); safe lane marking; route denial; and gap crossing (with pipe fascines) missions.

Jackson highlighted: ‘The Terrier is built for growth. It is the first AEV to have full electronic open architecture, which enables integration of robotic technologies and easy capability upgrades. Terrier’s drive-by-wire vetronics system enables full remote control from up to one kilometre away. This also lays the foundation for autonomous operations in future upgrades.’

The British Army also operates the well-armoured Trojan AEV based on the Challenger 2 chassis. Referring to the Trojan and Terrier, Jackson revealed: ‘RBSL is looking at a variety of potential upgrades to enhance their key roles of breaching, gap crossing and route denial, including autonomous operation, survivability upgrades (including active protection), sensors, additional special-to-role engineering attachments for the excavator arms and powertrain improvements.

Production runs of both these BAE Systems vehicles have ended, but RBSL continues to support British Army vehicles. Jackson added: ‘Within our Rheinmetall family, RBSL has the expertise and skills to deliver AEV requirements and capabilities using a variety of base vehicle options.’

This was presumably a reference to Leopard 2-based AEVs like the Kodiak Pionierpanzer 3. Furthermore, FFG created the Wisent 2 from surplus Leopard MBTs, turning them into multifunction platforms that can be configured either as AEVs or recovery vehicles. With 95% commonality, they can be converted from one function to another within 24h.

Tracked AEVs are certainly a useful tool within armies, although they tend to be expensive to buy and heavy to operate. Wheeled AEVs are less common, but one prime example is the Stryker M1132 Engineer Squad Vehicle. Equipped with a mine clearance blade and lane marking system, this 8×8 vehicle from General Dynamics Land Systems (GDLS) also carries a combat engineer squad.

Dedicated vehicles for breaching minefields are another category of combat engineer vehicle. One powerful example is the Abrams-based M1150 Assault Breacher Vehicle (ABV), while examples of mine-clearing vehicles using flails are the Trailblazer from ST Engineering in Singapore, the Danish Hydrema 910 MCV and the British Aardvark.

It is perhaps odd that the US Army and USMC never introduced a true AEV based on the highly successful M1 Abrams. The army cancelled the M1 Grizzly AEV programme in 2001 because it was deemed too expensive. However, to fill a capability gap, the aforementioned ABV – nicknamed the ‘Shredder’ and a specialised breaching vehicle rather than a pure AEV – was inducted in 2009. A dozer blade or mine plough is fitted on the ABV’s front, and its other main equipment is two Linear Demolition Charge Systems (rockets that shoot lines containing C-4 explosives into a minefield).

Australia is also an Abrams tank user, and it currently has a requirement for AEVs and bridge-layers under Project Land 8160 Phase 1. Documentation disclosed that the ‘army seeks to acquire an armoured engineering system to provide an under-armour obstacle breaching and bridging capability to support mounted forces… This will be based on an M1 tank chassis and may be delivered by three variants: an Armoured Breacher Vehicle, an Armoured Bridge Launcher and an Armoured Engineering Vehicle.’ The entire system is due to be in service by around 2025 and will be allocated a budget of $780 million to $1.17 billion.

It is clear that the ABV is the solution the Australian Army has in mind for its under-armour obstacle breaching requirement. Meanwhile, the Joint Assault Bridge based on the M1 hull is the obvious answer for its bridge launcher capability. Carrying much greater attendant risk for the Australian Army in terms of cost, capability and technical engineering is an M1-based AEV with a full-width earthmoving blade and excavator arm.

With the US having abandoned the Grizzly, Australia will have to develop this AEV in-country. Australian-based companies with the capacity to work on such a variant would likely include GDLS and BAE Systems.

Perhaps the best-known supplier of AEV subsystems is British firm Pearson Engineering, and its components are found on vehicles like the ABV, Terrier, Challenger 2, Leopard, CV90, M1 Abrams, Leclerc and Stryker, for example.

Richard Beatson, Business Development Director at the company, explained: ‘Pearson Engineering’s approach is to provide flexibility and adaptability on the battlefield through integration of a wide range of vehicle front-end attachments. These attachments, which span counter-mine, counter-IED, earth/obstacle-moving and gap crossing capabilities, are attached to the vehicle via a vehicle integration kit. This acts as a ‘common interface’ between the vehicle and the attachments, allowing them to be rapidly attached, operated, jettisoned if required, removed and interchanged with other front-end equipment.’

Thus, a single host vehicle can be adapted to act as a bridge-layer, a mine breacher or an excavator, depending on operational needs. The UK firm noted: ‘This approach to “metamorphosis” supports agility and takes away a level of predictability in the eyes of the adversary.’

Bridge-layers are typically dedicated specialist combat engineering vehicles, and therefore expensive and few in number, but Pearson Engineering’s bridge launch mechanism allows any suitable armoured vehicle to carry, launch and recover a bridge in less than two minutes. ‘We are independent of the vehicle and bridge provider, and so we provide armed forces with the opportunity to configure their equipment to their own specific needs without the need for investment in a dedicated bridge launcher,’ Beatson said.

Pearson Engineering does not anticipate any lessening in demand for combat engineering support. ‘We see a growing need to provide combat vehicles with some independent mobility without aﬀecting their core mission. With current NATO-aligned doctrine outlining a need to “march divided and fight united”, it is acknowledged that engineering assets are highly valuable but unable to be omnipresent when forces are dispersed. Highly adaptable AEVs will support this, but it is also recognised that combat vehicles will face obstacles that they may need to defeat quickly.’

One solution that Pearson came up with to ensure such adaptability is the Slice vehicle integration kit. Unveiled last November, Slice permits front-end equipment to be shared between engineer vehicles and combat vehicles. Fitted or removed within 15min, the Slice lightweight adaptor has an integrated hydraulic motor pump and control system, and it does not impinge upon a driver’s vision.

Even newer from Pearson Engineering is Threat-Sense and Threat-Pathway, launched in February this year. Attached to a wheeled or tracked AFV, visual and thermal camera video streams detect air-dispensed scatterable mines. AI is used to identify these surface-laid threats such as antitank and anti-personnel mines, alerting the crew with an audible warning. The fully passive system then decides the most viable route for the vehicle to avoid the threats.

However, if no safe route is available, the approximately 250kg Threat-Pathway plough-like component is unfolded from the AFV’s nose and is deployed to overcome stalled movement. The advantage of this Threat-Sense/Threat-Pathway suite is that regular combat AFVs become less reliant on specialist AEVs.

In terms of future trends, Beatson opined: ‘We think the future of AEVs will include optionally manned, remote-control and semi-autonomous vehicles which will need to ensure their own mobility as well as provide mobility and counter-mobility to combat operations. There is an increasing need for multirole vehicles and an ability to do more with less to meet budget requirements and to oﬀer less predictability to adversaries. Many armies cannot aﬀord bespoke AEVs, and hence greater capability through configurable front-end equipment is becoming of greater importance.’

Technology and digitisation oﬀer plenty of applications for AEVs too. Beatson again: ‘We anticipate a rise in a need for intelligent so the cognitive burden on operators in highly complex environments. Products such as Threat-Sense will support this move with an ability to “sense” and understand explosive threats to provide better insights and to enhance operational tempo.’

Pearson Engineering anticipates a trend towards lighter-weight platforms. This will see 8x8s and medium-weight tracked vehicles playing a bigger role in providing combat engineering capability on the battlefield. Such new modular systems will surely also become more aﬀordable for a wider range of customer nations.